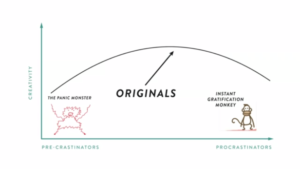 This is a very well written interesting analysis of the origins of originality and how our society can foster it. I would recommend this book to basically anyone. It is a must read, I am planning to read it again sometime next year. Its a easy book to read, can be completed in 4 to 7 days max.

Few of the pointers from the book:

* When we become curious about the dissatisfying defaults in our world, we begin to recognise that most of them have social origins: Rules and systems were created by people. And that awareness gives us the courage to contemplate how we can change them.

* The intense desire to succeed leads us to strive for guaranteed success. The drive to succeed and the accompanying fear of failure have held back some of the greatest creators and change agents in history.

* Having a balanced risk portfolio (e.g. holding day job while working on building a startup) provides a sense of security in one realm that gives the freedom to be original in another.

* The biggest barrier to originality is not idea generation, its idea selection. False positives and false negatives are both debilitating.

* To accurately predict the success of a novel idea, its best to be a creator in the domain you’re judging.

* Powerless communication (e.g. leading with your flaws) works when your audience is initially sceptical. This approach makes people lower their mental shields (initially raised to avoid being unduly influenced)

* Power involves exercising control or authority over others; status is being respected and admired.

* First-mover advantage tends to prevail when patented technology is involved, or when there are strong network effects (e.g. social media).

* To succeed, originals must often become tempered radicals. They believe in values that depart from traditions and ideas that go against the grain, yet they learn to tone down their radicalism by presenting their beliefs and ideas in ways that are less shocking and more appealing to mainstream audiences.

* Role models (even fictional ones) can inspire us to be more original, if we identify strongly enough with them (e.g. Harry Potter faces discrimination for not having pure wizard blood, by empathising with these characters readers become less prejudiced against minority groups in their own lives)

* When we’re not yet committed to a particular action, thinking like a defensive pessimist can be hazardous, torpedoing your motivation.But once one is settled on a course of action, it’s better to think like a defensive pessimist and confront them directly. Imagining the worst-case scenario lets us harness anxiety as a source of motivation to prepare and succeed. When we’re anxious, the unknown is more terrifying than the negative.

* The evidence suggests that social bonds don’t drive groupthink; the culprits are overconfidence and reputational concerns.” “Bridgewater has prevented groupthink by inviting dissenting opinions from every employee in the company.

Pick this book up—it’s wildly entertaining, and you’ll get so much out of it.