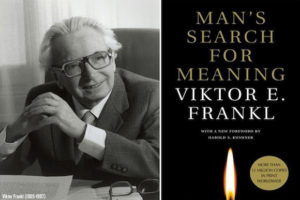 Man’s Search for Meaning is written by Psychiatrist Viktor Frankl’s. Its his memoir with descriptions of life in Nazi death camps and its lessons for spiritual survival.

Basis of the book is that we cannot avoid suffering but we can choose how to cope with it, find meaning in it, and move forward with renewed purpose. This book should be read by anyone feeling depressed, as after reading it I am sure he will be thankful enough for his own life.

The book is divided into two parts. The first section recounts in vivid detail Frankl’s horrifying experiences as a prisoner in a Nazi concentration camp. Frankl, a former psychiatrist, also describes his observations of other prisoners, and what he felt to be the main way in which people tried to cope with the insurmountable obstacles they faced. He found that those who could find meaning or purpose in their suffering were the ones who also seemed better able to find the strength to go on. As I recall, Frankl personally found his purpose in the hope of someday being able to see his wife again… a hope that was strong enough to get him through the daily horrors he faced.

The second half of this book is devoted to the therapy he developed based on the search for meaning, which he calls logotherapy. The basic premise is that those who can find meaning in their suffering are better able to cope with what would otherwise be a struggle too hard to bear. Its more theory hence I loved first section more than this one.

I highly recommend this book!! Check out this youtube video to get the taste of the book: