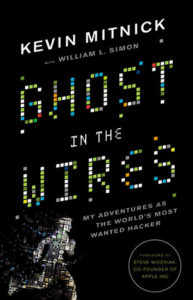 I had wanted to read this book for quite some time now and today I have finally done it. Mitnick’s story is legendary, this is probably the closest we’ll ever get to the true story without embellishments and ridiculous rumors. As Mitnick points out several times in his own story, his escapades are remarkable enough without the crazy rumors that grew around his legend over the years.

This unbelievably wild and crazy book describing the “adventures of the world’s most wanted hacker” was captivating from start to finish.

Granted, I am a “technologically-inclined” sort of person, but this book appears to have been written to appeal to both “techies” and “non-techies” alike. Techies will appreciate the relative simplicity of the incredible hacks that Mitnick managed to pull off, while non-techies will gape in astonishment at the achievements and audacity that these hacks involved—and are also given quick, but understandable explanations of technical jargon whenever necessary (which is actually not often, as this isn’t a technical manual).

No matter who you are, you will walk away from this book marveling at the extent of Mitnick’s escapades (to give just one example: the way he was surveilling the FBI the entire time they were trying to surveil him!). This is the electronic equivalent of Frank Abagnale’s story in Catch Me If You Can, and every bit as outrageous and entertaining.

It is a good read which you can complete easily in 2 week times. You can get your copy from here.

Tagged : Ghost in the Wires / Mitnick's